Einstein Lecture 2022: Ripples in Space and Time | How gravitational waves have shaken our universe is a twin lecture by world-renowned experts, Professor Geraint Lewis and Professor Tara Murphy and sponsored by the Australian Institute of Physics (NSWAIP) in conjunction with UNSW Physics. Hosted by UNSW Associate Professor Graeme Melville.

More than a century ago, Einstein revolutionised our view of gravity. But buried in his mathematics, he found that space and time could ripple like waves on a pond. In this talk, we will take you on a journey exploring Einstein’s gravitational waves, from their faltering theoretical beginnings to their successful detection in one of the world’s most sensitive experiments. We will peer into the darkness revealed by gravitational wave telescopes and spy on the universe’s most violent and energetic events, from crashing neutrons stars to the death of black holes. We will also look to the future, to more powerful gravitational wave telescopes, that hold the promise of revealing some of the biggest mysteries in the cosmos, and we will tell the story of the Australian contributions on this exciting journey. 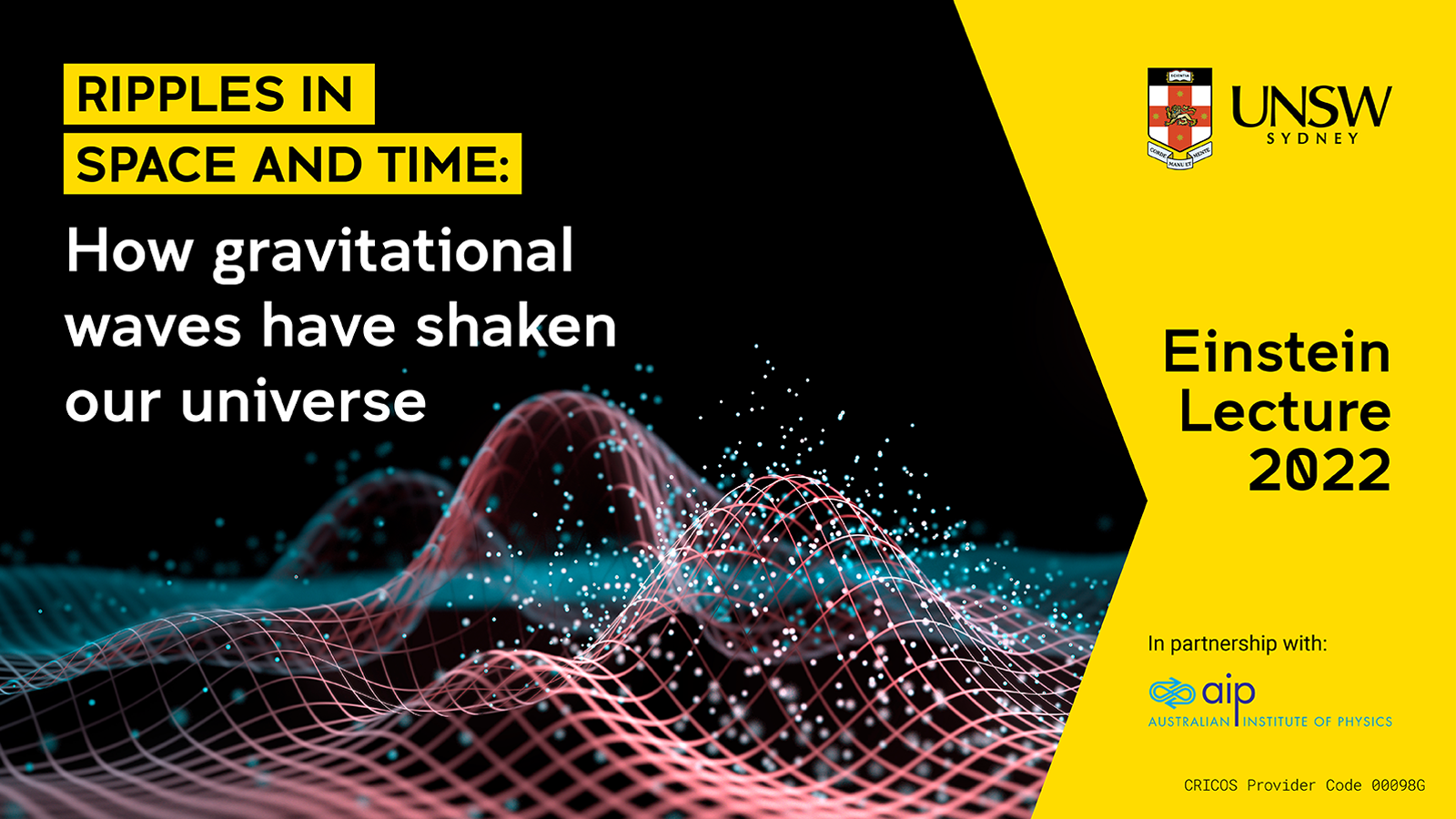 Professor of Astrophysics at University of Sydney

Professor Tara Murphy is a Professor of Astrophysics at the University of Sydney, and a member of the OzGrav Centre of Excellence for Gravitational Wave Discovery. She is a world expert on radio transients – astronomical objects that change rapidly with time.

Since 2015 she has led the Australian effort in radio follow-up of gravitational wave events, culminating in the first detection of radio emission from a binary neutron star merger GW170817 in collaboration with international colleagues. She has published 150 scientific publications on topics ranging from gamma-ray bursts, to flaring stars to pulsars.

Tara loves sharing her passion for astronomy, and has been featured on national television and radio, newspapers and social media. Her writing has featured in the Sydney Morning Herald, The Conversation and Cosmos Magazine. She has spoken at public events including VIVID Sydney, Sydney Astrofest and the Sydney Science Forum.

Born and raised in Old South Wales and with a passion for astrophysics, Professor Geraint Lewis spends his time unravelling the dark side of the universe, the dark matter and dark matter that dominate the cosmos. As a Professor of Astrophysics at the Sydney Institute of Astronomy, his research focuses upon cosmology, gravitational lensing and galactic cannibalism, as well exploring why our universe appears to be just right for complexity and life, publishing more than four hundred research articles. He also undertakes a broad array of awarding-winner science outreach, bringing the wonders of the cosmos to broad audiences through public speaking and writing, including publishing several world-renowned books in the mysteries of the cosmos.

Associate Professor Graeme Melville is in the astrophysics division of the School of Physics at UNSW Sydney where he is doing research on the atmospheres of Exoplanets, polarisation of stars and nuclear physics. He has been past Chairman of the Australian Institute of Physics in NSW and previously was part of a Cancer Research Group at St George Hospital. He did research at Wollongong and Macquarie University Physics Departments and was one of the Assistant Directors at the Department of Defence (DSTO). He has also taught science, mathematics and computers in NSW High Schools. Presently he is an ABC radio guest science speaker and was also a professional tennis player in the 1980s.