The Spirit of Youth

Experience well-known composers like Schubert, Rimsky-Korsakov and Dohnányi from the new and surprising perspective of their youthful works, as well as the world premiere of the exciting and accomplished Slipstream by rising Australian star, Holly Harrison.

At 27 the self-taught Rimsky-Korsakov was appointed professor at the St Petersburg Conservatoire, becoming, he joked, ‘possibly its very best pupil!’ In the Quintet for winds and piano he masters the classical styles while retaining his legendary ear for instrumental colour and joyful sense of rhythm.

Ernö Dohnányi wrote his serenade in 1902. It is a suite of lyrical and dance-like movements framed by marches, suffused in rich late-Romantic harmony with accents of Hungarian folk-music.

Young Australian composer Holly Harrison has established herself as a major voice with performances of her work in four continents. The long-awaited Slipstream, composed for the Australia Ensemble UNSW, evokes keening shanties and bagpipes, swing and bluegrass, dream states and visceral energy.

David Griffiths is a member of two of Australia’s leading chamber music ensembles, the Australia Ensemble UNSW and Ensemble Liaison. He also holds the position of Associate Professor of Music (Clarinet) and Coordinator of Chamber Music at the Melbourne Conservatorium of Music, the University of Melbourne. A passionate educator and performer, he has presented masterclasses and performances in Asia, Europe, United States, the Middle East and Australia including a critically acclaimed debut in Carnegie Hall’s Weill Recital Hall. As a soloist he has appeared with the Melbourne Chamber Orchestra, Tasmanian Symphony Orchestra, Sydney Symphony Orchestra, Orchestra Victoria, Australia Ensemble UNSW, Shanghai Radio Orchestra, Macau Orchestra and the Monash Academy Orchestra.

As a member of Ensemble Liaison, he curates and performs an annual three-concert series at the Elisabeth Murdoch Hall at the Melbourne Recital Centre which is currently in its 16th season. He has also performed with the New Zealand, Goldner, Tinalley, Acacia, Flinders and Australian String Quartets, the New York Wind Soloists, and the Southern Cross Soloists. He has collaborated with many leading artists including Nemanja Radulović, Ray Chen, Anthony Marwood, Henning Kraggerud, Emma Matthews, Cheryl Barker, Peter Coleman-Wright, David Jones, Paul Grabowsky, Tony Gould, and has appeared at the Australian Festival of Chamber Music in Townsville, Port Fairy Festival, Lucerne Festival and the Pacific Music Festival in Sapporo, Japan.

Some recent highlights include a performance of John Adams’ Gnarly Buttons Clarinet Concerto with the Australia Ensemble UNSW, the Weiland Concerto with the Melbourne Chamber Orchestra, a collaboration with accordion virtuoso James Crabb, Mozart’s Clarinet Quintet and Concerto at the 3MBS Mozart Marathon and the complete chamber works of Brahms in one day in collaboration with Timothy Young, Svetlana Bogosavljevic and the Australian String Quartet.

David’s recordings with Ensemble Liaison of Messiaen’s Quartet for the End of Time for the Melba Recordings label and Trios of Brahms, Beethoven and Bruch for the Tall Poppies label have won high praise from critics around the world. He is a Backun Clarinet performing artist.

Dene Olding, trained at the Juilliard School in New York, winner of a Churchill Fellowship for advanced studies and one of Australia's best-known instrumentalists, has won many awards and was a Laureate of the Queen Elisabeth of Belgium International Violin Competition. He has had a distinguished career as a soloist in Australia, New Zealand and the USA, performing over forty concertos, including many world premieres. His recording of Ross Edwards' Maninyas was the winner of the 1994 ARIA award for best classical recording and the Cannes award. He joined the Australia Ensemble in 1982 and was also at that time leader of the Australian Chamber Orchestra. He is also first violinist of the Goldner String Quartet, Concertmaster of the Sydney Symphony Orchestra and director of SSO's concert series at Angel Place. Dene is Artistic Advisor to the Michael Hill International Violin Competition and has served as a juror on other international competitions. He is also in demand as soloist and director with other Australian orchestras and combines a busy schedule of performing, touring and recording with his family life in Sydney. He plays a Joseph Guarnerius violin made in 1720.

Dimity Hall is well known to national and international audiences as a member of both the Australia Ensemble @UNSW and the Goldner String Quartet, with whom she has performed, toured and recorded extensively. Dimity’s outstanding performances as a guest artist with the Australia Ensemble from 1986 led to the creation of a seventh core position in 1992.
After studying with Alice Waten in Sydney, Dimity undertook postgraduate students with Herman Krebbers in Amsterdam on a Netherlands Government Scholarship, performing in recital and as a casual member of the Royal Concertgebouw Orchestra for concert, tours and recordings.
In Australia, Dimity has performed with the Australian Chamber Orchestra as Principal Second Violin, guest Leader and soloist, with the Sydney Symphony as guest Principal, and as guest Concertmaster with the Australian Opera and Ballet, Melbourne and Adelaide Symphony Orchestras.
Dimity made her solo debut with the Sydney Symphony in 2002 performing Vaughan Williams’ The Lark Ascending, later recording the work for ABC Classics. She has been soloist with the Canberra Symphony Orchestra, Brisbane Camerata of St John and in 2013 will perform the Brahms Double Concerto with the Woollahra Philharmonic Orchestra and her husband, Julian Smiles.
Dimity was a juror for the 2003 Melbourne International Chamber Music Competition, and coaches young chamber musicians through Musica Viva, the Sydney Conservatorium and Australian Youth Orchestra. In 2008 and again in 2012, she and Julian Smiles combined with contestants in the Chamber Music section of the Sydney International Piano Competition.

Irina Morozova, one of Australia's leading violists, has been principal viola in the Australian Chamber Orchestra, guest principal of the Sydney Symphony Orchestra and principal viola of the Elizabethan Trust Orchestra. She is a foundation member of both the Australia Ensemble UNSW and the Goldner String Quartet and tours internationally and records with both groups.

After studies with Richard Goldner and Robert Pikler at the NSW State Conservatorium of Music she undertook advanced studies and work in Europe and the USA before returning to Australia. She has regularly appeared as a soloist with major Australian and New Zealand orchestras. A member of distinguished chamber music juries, she presided on the juries of the Shostakovich International String Quartet Competition in St Petersburg, Russia, the Melbourne International Chamber Music Competition and was invited to perform and adjudicate at the Lionel Tertis International Viola Competition on the Isle of Man. Irina has recently been a frequent guest principal with the Hong Kong Philharmonic Orchestra. She plays a viola made by A.E. Smith of Sydney in 1947.

Julian Smiles has for over 30 years been a central figure in cello performance and teaching in Australia. On graduating from the Canberra School of Music at the age of nineteen he was appointed principal cellist with the Australian Chamber Orchestra and rapidly gained prominence as a chamber musician in performances for Musica Viva Australia, Kathryn Selby and Friends and at the Huntington Estate Music Festival.

In 1991 he was invited to join the Australia Ensemble UNSW, and in 1995 formed the Goldner String Quartet with colleagues Dene Olding, Dimity Hall and Irina Morozova. With these two chamber groups he has performed to critical acclaim at major venues and festivals throughout the world, made over 30 CDs on leading labels, and premiered many works by Australian and international composers.

Julian’s appearances at festivals over the years have included artistic collaborations with musicians such as Piers Lane, Tasmin Little, Edgar Meyer, Alexander Sitkovetsky, Amy Dickson and James Crabb. He has also been engaged as a collaborative artist in the chamber music round of the Sydney International Piano Competition of Australia on numerous occasions.

Julian is active as a soloist with numerous concerto appearances. During 2018 Julian’s high standing as a performer was recognised by the Canberra Symphony Orchestra, as their inaugural “Artist in Focus”. In this role he performed recitals and appeared as soloist with his wife Dimity Hall and pianist Piers Lane in performances of the Beethoven Triple Concerto. He has also premiered works for solo cello by eminent Australian composers such as Carl Vine, Mark Isaacs and Ross Edwards.

Having studied with Nelson Cooke and renowned cellist and teacher Janos Starker, Julian has developed a system of cello playing based on thorough and ongoing analysis of musical and technical issues that sees him sought after as a teacher and chamber music coach. He has held teaching positions at the Australian Institute of Music and Canberra School of Music, and is currently Senior Lecturer and Coordinator of Cello at the Sydney Conservatorium of Music.

Ian Munro is one of Australia’s most distinguished and awarded musicians with a career that has taken him to thirty countries in Europe, Asia, North America and Australasia. As a composer, Ian is the only Australian to have been awarded the Premier Grand Prix at the Queen Elisabeth Competition for Composers (2003), and was in 2011 the Featured Composer for Musica Viva Australia.
After completing his early training in Melbourne with Roy Shepherd, Ian furthered his studies in Vienna, London and Italy with Noretta Conci, Guido Agosti and Michele Campanella, launching his international career in the UK. He has performed with leading orchestras throughout the UK, Poland, Italy, Portugal, Russia, USA, China, New Zealand, Belgium, Switzerland and Uzbekistan, and with all the leading orchestras in Australia in over sixty piano concerti.
Ian has recorded for ABC Classics, Hyperion, Cala, Naxos, Marco Polo, Tall Poppies and the UK label Warehouse as soloist and chamber musician. Recent discs include the collected music by Tasmanian composer Katherine Parker and Elena Kats-Chernin’s piano concerto commissioned for Ian Munro by the Sydney Symphony Orchestra. A widely experienced chamber musician, Ian joined the acclaimed Australia Ensemble @UNSW in Sydney in 2000, for which he has also composed and arranged several works. 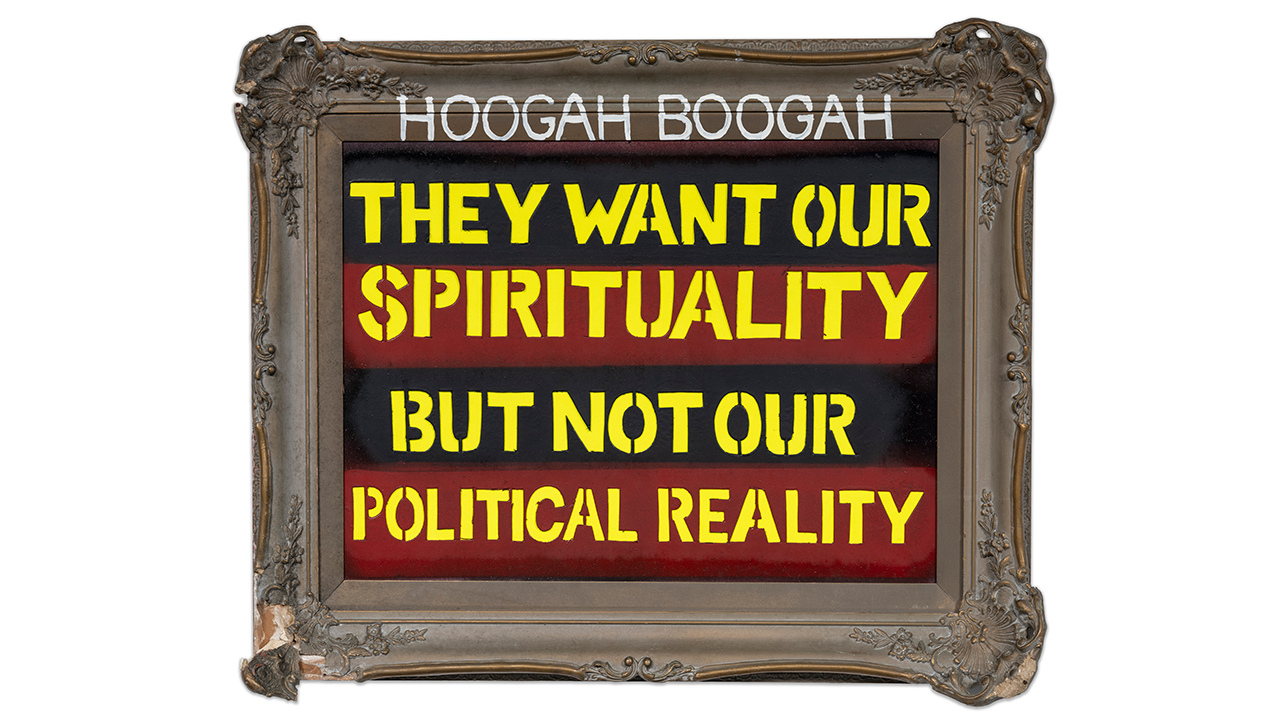 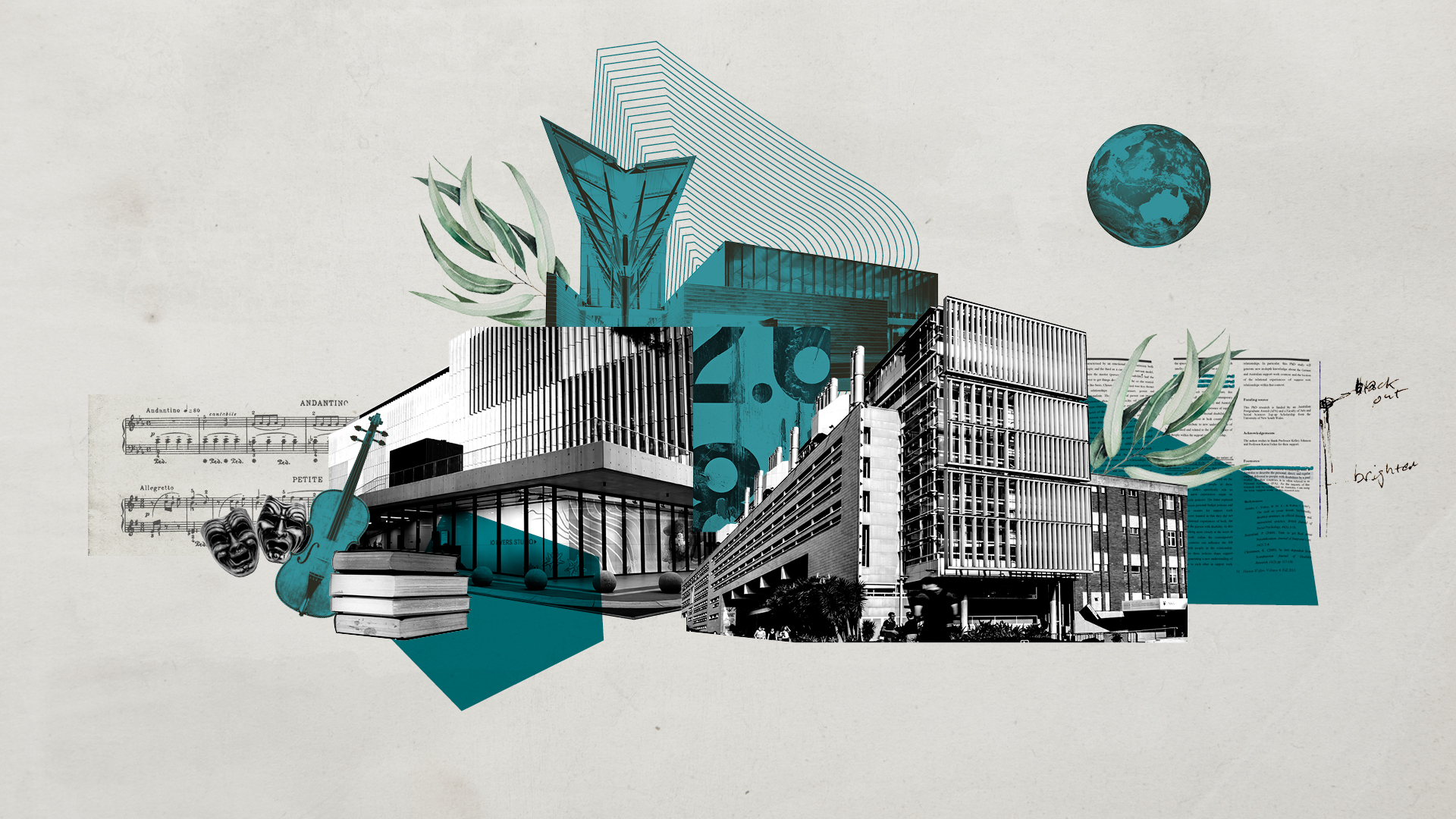 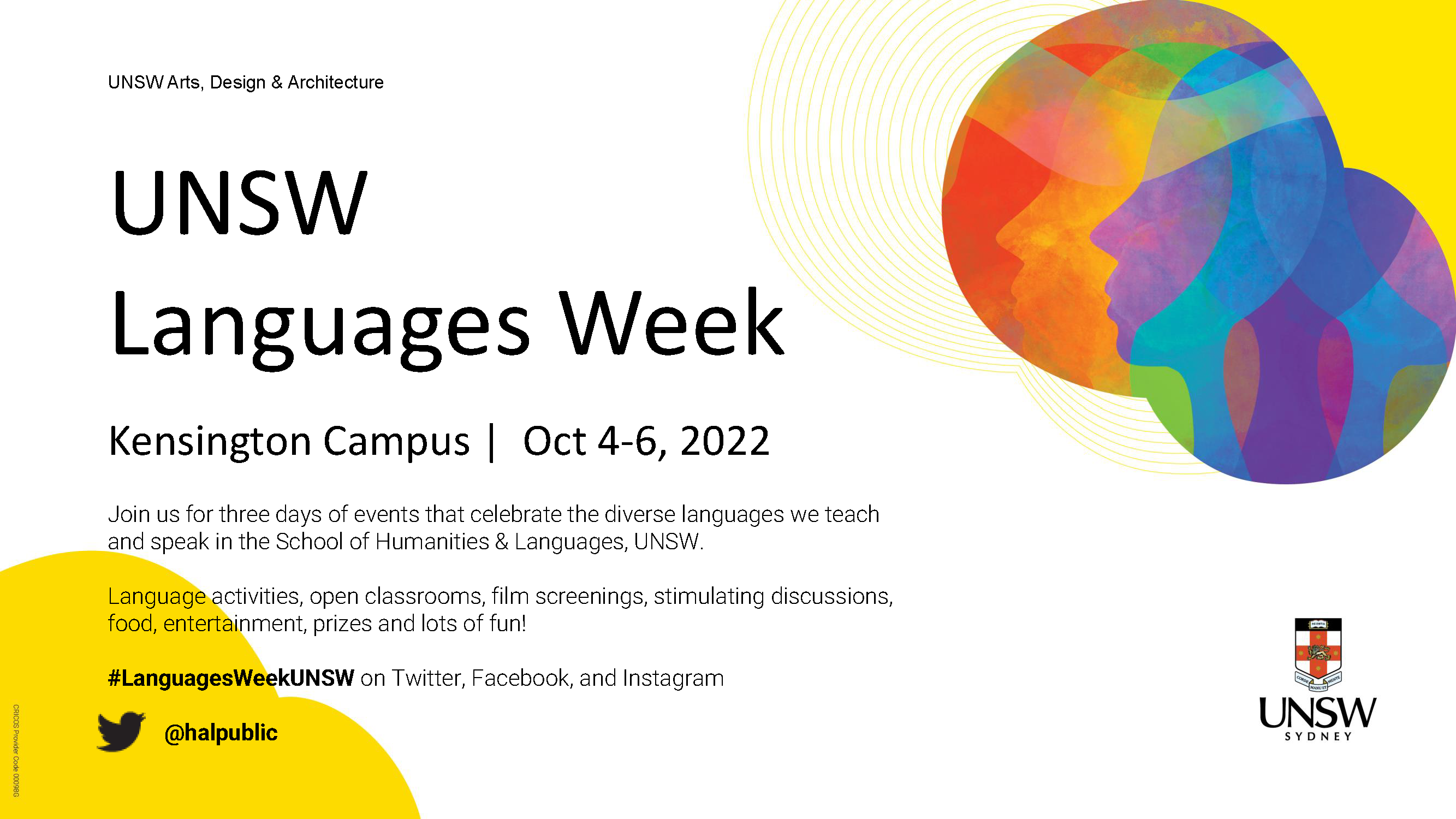 Featured
UNSW Languages Week Launch Event
Join us for three days of events that celebrate the diverse languages we teach and speak in the School of Humanities & Languages, UNSW.
Art and Culture
Campus events
Education
Humanities and Social Sciences 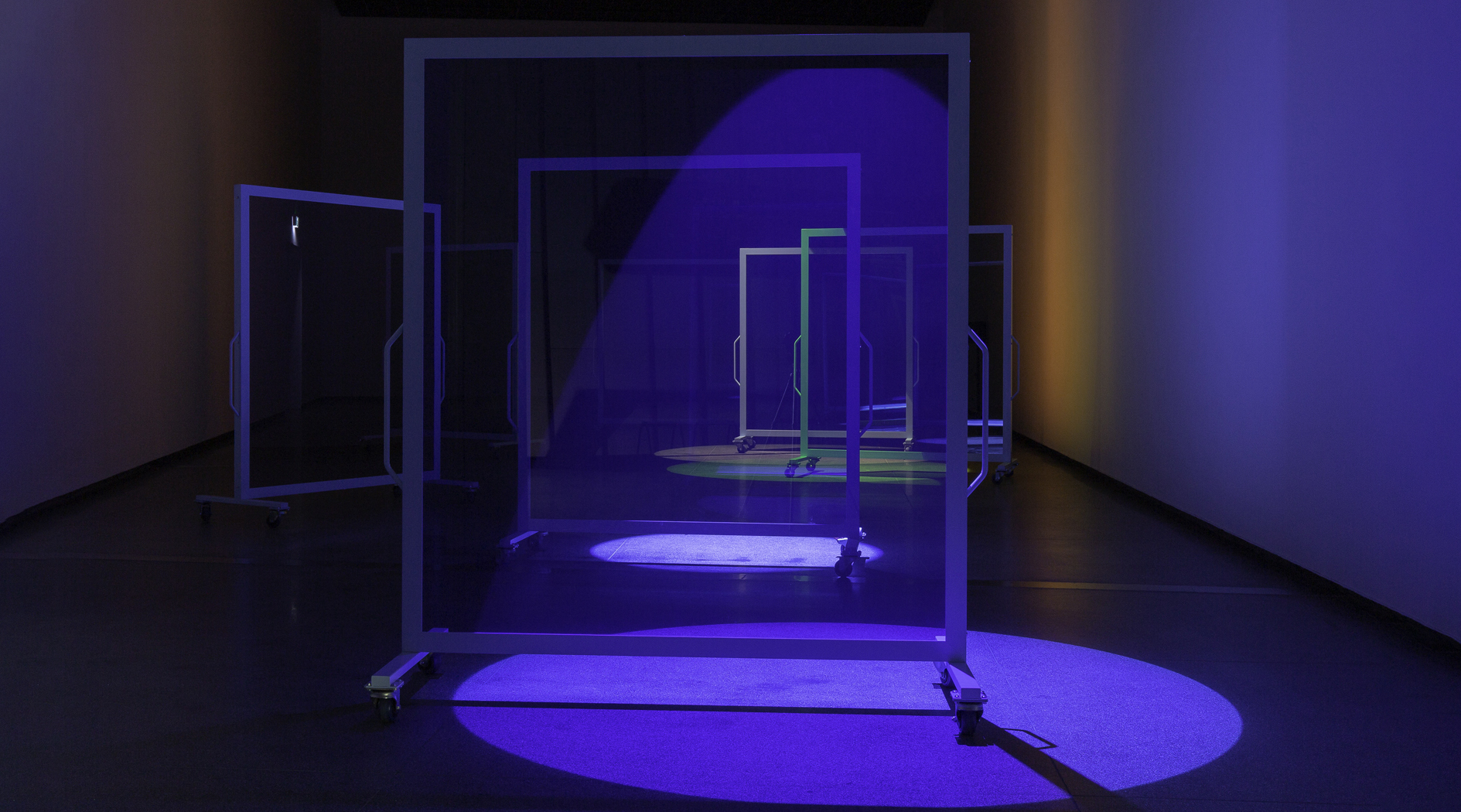